Schedule
Shows
About Us
Join Us
Advertise
Contact
LISTEN
LIVE

South West London is the best part of our capital city. We LOVE living in Richmond, Wandsworth, Merton and Lambeth and we want to celebrate our greatness.

Over a million people call South West London home and they deserve a community radio service providing local news and other content showcasing the people who live here.

We celebrate our greatness, diversity and vibrant culture by exposing the talents and creativity of the people who live here and hold those in power to account with a focus on improving life in South West London for everyone.

Riverside Radio has a volunteer force of 180 local people from every walk of life, age and background who come together to create something special for local people.

We have built a strong, friendly volunteer family giving those involved a shared purpose and pride in our area.

There is much to celebrate with the most amount of green open spaces in the capital, more people participating in sport than anywhere else in London, a huge variety of arts and performance venues, numerous local festivals and events, a thriving business community and stimulating and active political life.

Riverside Radio is at the heart of South West London connecting our diverse communities, celebrating our strengths and encouraging debate. 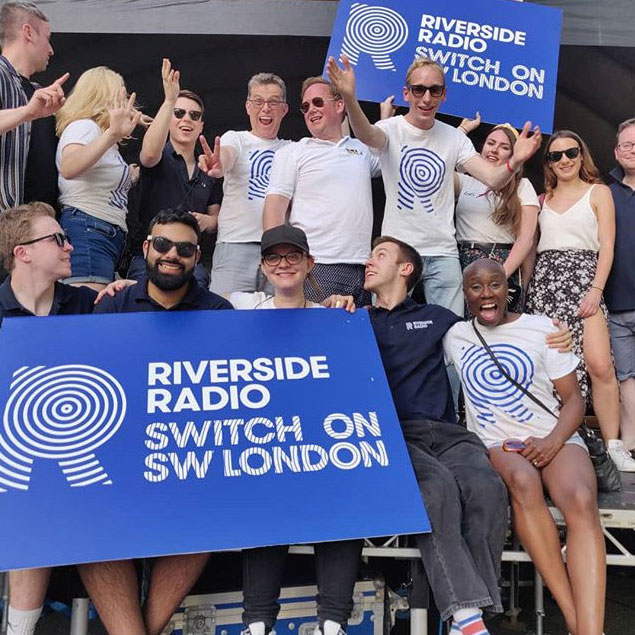 A YEAR IN
THE LIFE OF RIVERSIDE RADIO
150
Children aged between 3 to 16 years welcomed into the studio on ‘The Kids Are Alright Show’.
4
Outside Broadcast events hosting the main stage.
3
Special discussion shows on drugs, violent crime and the environment.
1000
Guests have been welcomed into our studio on air.
30
General Election Candidates interviewed.
160
Arts & Culture events featured in our ArtsWatch segment.
5
Christmas lights
outside broadcast events.
10
DAB Digital Radios given away to those who are lonely in lockdown.
7
Hour, mammoth election night broadcast with 6 reporters at all local counts.
22,000
MixCloud plays

Radio presenter and journalist Jason Rosam noticed a number of community online radio services being set up in other parts of London and wanted to set up a station for Wandsworth as he’s lived in the borough for the past 15 years.

A meeting was held at the Battersea Arts Centre in May 2013 after Jason published an advert for people who wanted to get involved.

Over 60 people turned up to the first meeting brimming with programme ideas.

Work then started on building on these ideas, finding a suitable studio space and raising funds to be able to pay for equipment.

The local community was fantastic with over £4,000 being raised using Crowdfunding for our studio equipment and software.

We were accepted for a Big Society Award from Wandsworth Council of £5,000. Amazing local HIV Charity Wandsworth Oasis offered us a space above their shop in Battersea Park Road for our studio. Volunteers then began fine tuning their programme ideas and were trained on the software and studio equipment.

As the end of 2014 approached a decision was made to launch the station in January 2015. A week of rehearsals took place at the start of the year.

On 12th January at 7.30pm the Mayor of Wandsworth Cllr Stuart Thom opened the station while a packed launch party was going on across the road from the studios.

In the Summer of 2017 Wandsworth Radio moved into new, purpose built studios at the Doddington and Rollo Business Centre in Battersea once again with help from the local community and our volunteers who raised over £3,000. We now have two studios in our unit: one for presenting, and one for our newsreaders.

In 2018, we were awarded ‘Digital and RSL Station of the Year’ at the Community Media Awards 2018 in Sheffield.

As opportunities for small, local radio stations to broadcast on DAB Digital Radio improves, a decision was made to expand the radio station to boroughs surrounding Wandsworth in preparation for broadcasting on the new small scale DAB.

We decided on the name Riverside Radio as the river Thames and river Wandle connect our four London boroughs of Richmond, Wandsworth, Merton and Lambeth together.

At the University Boat Race in Putney on April 7th 2019 Riverside Radio was launched with much fanfare, an outside broadcast and concert right by the riverside at Putney bridge.

In July we were finally awarded a licence by Ofcom to broadcast on the London Trial SSDAB service.

On August 1st we went live on DAB!

We have worked really hard to get everyone ready for the transition onto DAB and are all very excited to broadcast our shows to a wider audience across South West London.

Won the Digital Radio Station of the Year in a virtual ceremony at the Community Radio Awards for the second time.

Joined forces with local secondary school St John Bosco College by launching a Radio Club for young people from 11-16 years to build skills in broadcasting and media while gaining an NCFE qualification in radio and boosting confidence.

Celebrated Local Radio Day by broadcasting LIVE from a passenger boat on the River Thames from Kew to Westminster and back again.

Keep up with
all the news